I’ve spent the first few WimHof posts sharing data from inexpensive USB measuring tools while doing the WHM breathing.  But I haven’t talked much about the cold exposure part of the training.  In fact, for a few weeks after learning the breathing and meditation the first time (a few years ago), my wife and didn’t do the cold showers.  It wasn’t clear to us why we needed it if we were doing the meditation.  Now, having done more research and spent a lot of uncomfortable minutes in cold showers, I finally appreciate its value.

It seems that the ability to generate large amounts of adrenaline at will is a primary explanation for Wim Hof’s abilities.  Cold exposure can help you trigger adrenaline in a kind of feedback loop, and provides an environment for understanding and controlling it (and know that you’re doing it right).  In many of the studies performed on Wim, the observed effects of the meditation were mild at room temperature.  But the effects were substantial when he was submerged in ice.  He was able to maintain a constant flow of adrenaline greater than most people bungee jumping the first time!   Without doing the cold exposure, you have no mechanism for training your communication paths with your body and conditioning your stress response.

Nonetheless, the meditation and breathing is a really wonderful experience.  It’s very easy for “impatient westerners” to get value out of it immediately, even if that value is just feeling good.  Skip the cold exposure and just breathe.  However, having been through the cold showers and starting to enjoy them, I highly recommend you take a chance and try it!

How Cold is Your Tap Water?

If you have a tool for it, measure it.

When I first started the cold showers, it was sooo cold and painful, I would’ve guessed that the temperature was -25 Fahrenheit.  Being reminded that water freezes at 32 F, my next guess would be that our tap water was 33-35 F.   Then I actually measured it.  Sadly, it was only 48 deg F  😦

On the other hand, anything below 60 F / 15.5 C should do what you need it to:  induce a gasping response when it hits your back in the shower.  And this response is precisely your first challenge to conquer.  The first time I did it I spent 20 of the 30 seconds trying to relax and stop gasping.  The next time I did it I only spent 5-10 seconds.  Now I don’t gasp at all.  In addition to building a heat-generating response to cold exposure, you learn valuable techniques for relaxation in stressful conditions.

This may sound scary at first, but the speed at which you can demonstrate progress to yourself is encouraging.  Especially knowing that polar bear plunges and winter swimming are considered very safe for healthy people.  After about 8 showers I was able to handle two minutes and was amazed at how comfortable I was (and how quickly I developed that ability).

The Wim Hof 10-week video course comes with a workbook that you fill out and it recommends a schedule for cold exposure challenges:

As always, Wim recommends you listen to your body and do not push yourself too hard.  If you feel good, do more.  If you’re really not feeling up to it, take a break.  But you do need to expect it to be really challenging, and be ready for that challenge.   And go in with the mindset that you are going to beat it.

Remember:  like most things in life, the more you do it, the better you get at it!  So far, almost every cold shower has been substantially easier than the last (with a few bad days).  And I’ve never regretted doing it, no matter how cold the water feels before you get into it. I typically feel refreshed and more awake afterwards.  It apparently also raises your metabolism and boosts your white blood cell count (read: immune system).

Day 12 taught me that the mindset, meditation and the breathing are definitely a critical part of this cold training.    The few days before Day 12 showed such rapid improvement that I felt invincible.  Luckily, many of the cold showers the other days were only after 3 rounds of WHM breathing, plus a few minutes of slow, deep breaths standing in front of the cold shower before entering.  So only about 15 minutes to prepare (which is the daily meditation I wanted to do anyway).

(UPDATE:  After having gotten much deeper into the program a year later, I can confidently say that the breathing and meditation are not necessary, critical components.  At least not in the first 8 weeks of the program.  I occasionally have bad days like this even though I have now done 10 minutes in an ice bath, and I also have many days with zero preparation and I feel great for 10 minutes in the shower.  The breathing and exercises seem to help me prepare mentally, but I have now met a couple people who do 10 min cold showers who have never heard of Wim Hof!  The breathing only becomes crucial later when you want to generate heat while exposed.)

Even when I do prepare properly, I usually turn on the water feel it with my hand first.  It feels like death and I can’t imagine that I’m about to put my body into it, especially because I already feel a little cold from the meditation.   But I do the breathing, prepare mentally, and get in anyway.   And I always feel wonderful afterwards!

On day 13, my wife used a surface temperature IR gun before and after the initial cold shower to see exactly what the temperature difference was on the skin.  The results don’t need photo evidence, but I wanted to show off the device which uses a LWIR (long-wave infrared) detector to measure the “color” of the infrared emissions of the surface you point it at.  It’s a cool device that you can now get for about $20 on Amazon.

After meditation and before cold shower, skin temp is 92.1 F 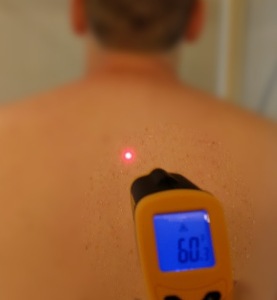 My wife says it actually read 58 F right when I got out, but was rising quickly and she fumbled with the camera before she could get a readable picture.  About 10 seconds later it was at 65 F.  The fact that it was substantially above 48 F and was rising quickly, suggests that blood was flowing and restoring heat efficiently despite 1.5 minutes of super cold water.

The End of Winter

This won’t be the last WHM post I make, but with my return to a full-time job, I won’t get to obsess over it as much.  And I think it will be less exciting now that winter is over.  I’m super impressed with the results I’ve seen in a couple focused weeks, and will strive to maintain the benefits with a few meditation-and-cold-shower sessions per week.

3 thoughts on “Learning to Love a Cold Shower”